A special edition of the book Stormy Weather with one original crystal print in a slip case.
Signed and numbered on verso of the print and the book.
The original print can be chosen from five different images. 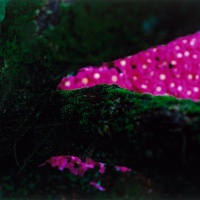 Born 1941 in Tokyo. After graduating from the Department of Photography, College of Art, Nihon University, he joined Light Publicity Co., Ltd for one year, before going to the USA to study under Richard Avedon. He subsequently published Chumon no ooi shashinkan (The photo studio of many orders), Talking Faces, and a string of other ambitious works that up to that point were unthinkable in Japanese portrait photography. Sakata has been shooting portraits for the covers of Aera magazine since its launch in 1988, and as a result of his relentless work, the number of people he portrayed so far amount to more than 1,000. In 2004, the exhibition ”Piercing The Sky” at the Tokyo Metropolitan Museum of Photography attracted much attention. Sakata received a Domon Ken Award and a Photographer Award from The Photographic Society of Japan in 2005. In 2013, the “Enoshima” series focusing on “portraits without people” was shown at the Hara Museum of Contemporary Art, and caused quite a stir as a groundbreaking new venture.