The images that make up the book were recovered from a ufology centre and are reproduced without any manipulation. Their use transcends the subject in favour of the aesthetic dimension. Each scratch, sign, dust, together with the different chromatic tones, accentuates the exquisitely pictorial nature of the images. The only texts in the volume are excerpts from the Bible that refer to the visions. INEXPLICATA VOLANTES expresses my inescapable need to investigate the poetic power of images. 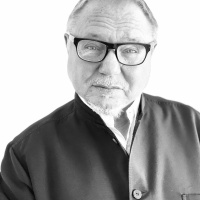 Born in 1950 in Switzerland.
Based in Lugano and Paris.

Luciano Rigolini’s initial studies were in cinema but he soon turned to photography. The beginning of the 1990s marked a turning point with the photographic work Urban Landscapes. In 1995, he joined the documentary unit of the European television channel Arte (Paris), where he was responsible for creative author film development until 2015.
While continuing his photographic work and research into new forms of narration and language, Luciano Rigolini produced films by filmmakers such as Chris Marker, Alexandre Sokourov, Naomi Kawase, Chantal Akerman, Apichatpong Weerasethakul, Tsai Ming-liang, and Laurie Anderson. Having the first exhibition at the Museo Cantonale d’Arte (Lugano) in 1992, and since then his work has been shown at Moma (San Francisco) and Kunsthaus (Zurich) in 1997, Paris Photo in 2001 or at the Fotostiftung Schweiz (Winterthur) in 2008, at the Musée de l’Elysée (Lausanne) and the Centre Culturelle Suisse (Paris) in 2012. In 2015, he had a personal exhibition at the Buchmann Art Galerie (Lugano). In 2017, his work was shown at the Fondation Cartier pour l’Art contemporaine (Paris) and the European Photography Festival of Reggio Emilia, Italy. In 2018, he showed his work at the Mast Foundation (Bologna, Italy), and in 2019 again at the Fotostiftung Schweiz (Winterthur). Since 2002, he has been working in photography exclusively through appropriation and rereading of amateur images and industrial documents. He is the author of ARTE of the Collection Photo, 12 documentaries on the history of photography from its origins to today with the scientific collaboration of Quentin Bajac, former chief curator of photography at the MoMA of New York.