Akio Nagasawa is pleased to announce the opening of the exhibition “Self portraits” by Vivian Maier.
After spending her entire life anonymously, only after her death Vivian Maier gained world photography’s attention. Her life shrouded in mystery gives her artworks a special shine.
This is Vivian Maier’s first solo exhibition in Japan and the show will be entirely focused on her self portraits. On display 27 prints, 20 monochromes and 7 colors photographies shot by Maier between early 1950’s and 1978. 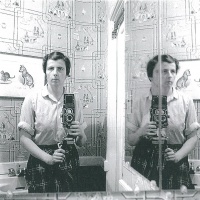 Vivian Maier was born in New York in 1926. She worked for about 40 years as a nanny, mostly in Chicago's North Shore, while pursuing photography in her free time as an amateur street photographer. During her lifetime, Maier's photographs remained unknown and unpublished until 2009, when her anonymous life as a photographer came to an end. After her death, a Chicago collector named John Maloof got his hand on some of Maier's prints and negatives, and view the remarkable quality of the photographies he decided to put them online which resulted into turning all her works into viral. In 2013, her life and work were the subject of a documentary film “Finding Vivian Maier". Nowadays, her work and her mysterious life keep capturing the interest of many people and her artworks have being shown in art galleries around the world.