Nakafuji Takehiko's Street Rambler is an anthology of photographs Nakafuji has taken from 2002-2014 documenting the street scenes of 7 of the worlds largest cities. 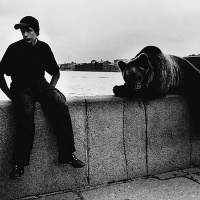 Born 1970 in Tokyo. Dropped out of the Faculty of Letters, Arts and Sciences, Waseda University. Graduated from Tokyo Visual Arts, Department of Photography. Has been exhibiting mainly snapshots of urban sceneries, taken in Japan as well as in East Europe, Russia, Cuba, Paris and New York among others. At the same time, he has been shooting a variety of artists as official photographer for such rock musicians as Les Rallizes Denudes, Yura Yura Teikoku and Masatoshi Tsunematsu. In parallel with his work as a photographer, he runs the Gallery Niepce in Yotsuya 3-chome, Tokyo, and hosts next to exhibitions also frequent workshops and other events.
Photo books include “Enter the Mirror”, “Winterlicht”, “Night Crawler”, “Hokkaido: Sakuan, Matapaan”, “Paris” and “Street Rambler”. Nakafuji received a Higashikawa Prize Special Award in 2013, and the Tadahiko Hayashi Prize in 2015.