Born 1946 in Hiroshima. Caused a stir with infrared photographs of couples and voyeurs gathering in parks at night, published as a series in Weekly Shincho in 1972. He started working as a house photographer for a British news agency in ’74, and eventually went freelance in ’78, working mainly for magazines such as Focus and Shashin Gendai. His solo exhibition “Kōen (Park)” was held at Komai Gallery in 1979. In 2007, the exhibition “The Park” at New York’s Yossi Milo Gallery, featuring new prints of photos contained in the book Dokyumento: Kōen (Document: Park), kicked off a string of further solo shows around the world. Collections of his works are being kept at numerous museums including the Museum of Modern Art, New York, the San Francisco Museum of Modern Art, and the Metropolitan Museum of Art. Photo books include Dokyumento: Kōen (1980), Sekigai Kosen (Infrared Light) (’92), and The Park (2007). 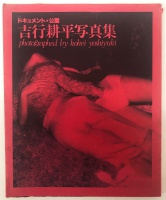