A collection of photographs taken by Takayuki Ogawa during his stay in New York from 1967 to 1968.

With this images, and the other photographs in NEW YORK IS, Ogawa succeeds in his desire to depart from a narrative format and to make one picture evoke multiple possible interpretations. So much of what he felt and observed that special year in New york can be perceived in each single picture and in the series's totality, which is a loving, but sober allegory about modern life in a metropolis.
From text by Anne Wilkes Tucker 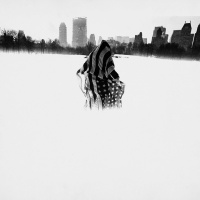 Born 1936 in Tokyo. After learning photographic techniques at Nihon University College of Art, joined the photography department at Bungeishunju Ltd. He left the company in ’65 to work as a freelance photographer and cameraman for magazines, advertisements and TV commercials. His series of photos shot in New York between 1967 and ’68 has been named “New York Is” by his close friend, photographer Robert Frank. While adopting a documentary style, Ogawa portrays the streets of New York from a personal, subjective point of view, in a somewhat stylish fashion that explicitly suggests his unique aesthetic. After returning to Japan, Camera Mainichi magazine dedicated the first 41 pages of their September ’68 issue to the photographer who went on to win a Newcomer Award from the Japan Photo Critics Association in the same year. Collections of Ogawa’s works are being kept at George Eastman House (USA), Tokyo Metropolitan Museum of Photography, Kawasaki City Museum and Nihon University among others. He died of emphysema in 2008.