Ebosi Yuasa was born in 1924, and died in 1987 at the age of 63. Aiming to be a painter, he entered Ichiro Fukuzawa’s art institute at the age of 16. That was where he encountered surrealism. Inspired by the American culture that the occupation forces had brought to Japan after the war, he joined the avant-garde art society around the likes of Kikuji Yamashita…

Ebosi Yuasa is a project in which the real Ebosi Yuasa, born in 1983, slips into the role of his fictional “self” as an artist who lived before and during the war. “I have been creating works of art as they could have possibly been made back at the time, while referring to a fictitious personal history. Through these activities, various fictional characters are gradually taking on physical form. The idea is to sneak some errors into history after my death in real life,” the artist explains about his project.

On display at this exhibition are mainly large-sized (ca. 2 meters wide) works, alongside other items that capture social phenomena in the 1960s, or highlight personal experiences of the fictional Ebosi Yuasa. We are looking forward to your visit. 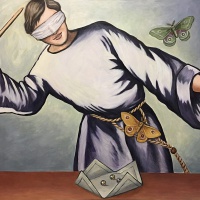