This exhibition will feature works from the Record No.50 by Daido Moriyama.

For me, “Record” is like a lifeline. It is indispensable just like electricity, water and gas are. It is because of “Record” that I keep stepping forward. It is a personal medium which allows me to constantly look back at myself.
– Daido Moriyama 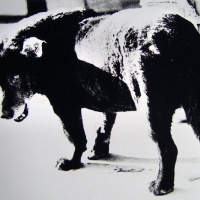 Born 1938 in Osaka. After working as an assistant for photographers Takeji Iwamiya and Eikoh Hosoe, he went independent in 1964. He has been publishing his works in photography magazines among others, and received a New Artist Award from the Japan Photo Critics Association for Japan: A Photo Theater in 1967. Between 1968 and ’70 he was involved in the photo fanzine Provoke, and his style of grainy, high-contrast images that came to be referred to as “are, bure, boke” (grainy, blurry, out-of-focus) made an impact on the realm of photography. Solo shows at New York’s Metropolitan Museum of Art and the Fondation Cartier pour l'Art Contemporain in Paris solidified Moriyama’s worldwide reputation, and in 2012, he became the first Japanese to be awarded in the category of Lifetime Achievement at the 28th Annual Infinity Awards hosted by the International Center of Photography (ICP) in New York. The “William Klein + Daido Moriyama” exhibition together with William Klein at London’s Tate Modern in 2012-13 was a showdown of two immensely popular photographers that took the world by storm.

One evening in early December 2021, I met a woman named Yaco at Akio Nagasawa Publishing in the Ginza area. At the time, I was a little tired of putting only street snaps into the Record journals, and had begun to think about doing things like female portraits. That was when Mr. Nagasawa introduced me to Yaco-san. We spent a while chatting about this and that, and as the conversation went on, as if by accident, she displayed a unique kind of sensitivity, and that instantly helped me make up my mind. The next volume of Record was going to be all about Yaco-san!

Once I had made the decision, things quickly fell into place. Without further discussion, I took her around the dusky Ginza and Yurakucho neighborhoods, and took pictures of her in the rough coat that she was wearing. It was the season when Christmas illuminations were turning every street corner into a gorgeous setting, and as Yaco-san moved around freely and flexibly in front of the camera, we were done with the shooting and returned to the gallery in less than two hours.

After a short break, we did some nude shots on the floors under and above the gallery. Yaco-san undressed without hesitating, and began to strike some casual poses quite naturally before I could even start giving instructions. So all I had to do was to keep releasing the shutter, and once again, the entire session took less than two hours.
I was sure that the records and the memories of that evening, of the photographer and the photographed alike, would casually manifest themselves on the pages of Record.

Even when taking into account my motivation this time, making an entire issue of Record into a Yaco-san special was an exception to the rule I guess. Not that this is something terribly important, but it is issue number 50 after all, so with this one being a special case, from here I’m going to return to my usual pace. Walk, watch, and shoot. This is my rhythm, and this is all that I do. When I met Mr. Nagasawa in a coffee shop in Kamakura the other day, he lightly said to me, “Let’s make it to Record No. 100,” and I lightly said thank you. His commitment to the publication made me very happy. Nevertheless, I can only do one at a time, so next is number 51, and after that, number 52.
Anyway, at this point, Record is the lifework and the lifeline of my photography…

– from afterwords by Daido Moriyama