Akio Nagasawa Gallery is pleased to announce the opening of the exhibition “Scharfesque: Kenny and Malia Scharf”.
On display are about 40 pieces including 10 artworks and 2 figurines by Kenny Scharf and Malia’s Scharftees selection of t-shirts, hoodies, denim jackets, all items hand painted by Kenny Scharf. This exhibition combines art and fashion with the aim to recreate the atmosphere of  “Scharf Shock”, the art shop that Kenny opened in Soho, New York in the 90’s. 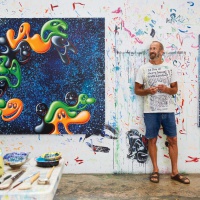 Kenny Scharf, born in 1958 in California, participated in the East Village art scene during the 1980s. A friend of Andy Warhol, Klaus Nomi and Ann Magnuson, Scharf was one of the leading figures of Club 57, while, along with Keith Haring and Jean-Michel Basquiat, he contributed to the redefinition of painting through the use of a painterly language influenced by street art and 80’s pop aesthetics. Having worked with different kinds of media, ranging from painting to installation art, Kenny Scharf developed a visual language based on vivid “candy” colors, and invented a symbolic universe inhabited by his own cartoon characters that were inspired by the heroes of the TV series “The Flintstones” and “The Jetsons” that he used to watch as a child. Scharf's characters seem to adopt a rather critical stance towards the ideals of modernist painting. They keep sprouting up through biomorphic shapes on the surface of the canvas, or on the walls of buildings, and they even take a three-dimensional form on Scharf’s sculptures… always in a playful mood to disrupt reality and “break the rules, if any.” 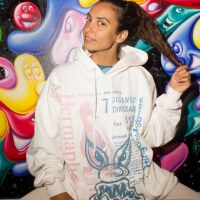 Malia Scharf is a multifaceted human; an artist, an earth activist, a filmmaker, a writer, and a healer. She is debuting her first feature film about Kenny Scharf: When Worlds Collide this fall 2020. Scharftees is a beautiful collaboration and manifestation of the belief that ”life feeds art and art feeds life"; a way of creating and giving back where it is needed.