The artist will be at the gallery on August 7 and 8!!
We will be closed on July 31. Thank you for your understanding.

Akio Nagasawa Gallery Aoyama is pleased to announce the opening of the exhibition “Hybridizing” of works by Yuki Nara.

On display are a little over twenty items, including next to the Bone Flower series, Nara’s acclaimed maiden work, as well as pieces from a new series titled Ice Wall.

Being the son of Ohi Chozaemon XI from the family of originators of Ohi-yaki, a type of ceramic ware with a history of more than 350 years, Nara initially distanced himself from ceramic art, and studied architecture at the Tokyo University of the Arts. However, during his time at university, he developed an interest in ceramics, and eventually took a leave in order to enroll at the Tajimi City Pottery Design and Technical Center. An extraordinary creator with outstanding talents in both ceramic art and architecture, Nara continues to attract attention from within Japan and abroad.

Referencing and drawing from the essence of the culture and nature of Japan that he has been focusing on in his studies, Nara has innovated the realm of ceramic art with his own unique technique that he appropriately calls “hybridizing,” to create an ultramodern style much different from traditional ceramics. It came about in the way comparable to a solution a researcher arrives at through repeated experimentation in a laboratory.

The Ice Wall series that is unveiled at this exhibition represents a new form of art that was born out of a fusion of ceramics and cutting-edge technology. Nara’s works are inspired by the artist’s experience of the vast snowy landscapes of Kanazawa, where he spent his childhood. With a strangely fluctuating quality somewhere between two- and three-dimensional, and between line and surface, every piece radiates an exquisite geometrical beauty that is taken to an almost sublime level thanks to the generous use of glaze.

Two aspects that Nara is generally keeping in mind during the creation of his works are those of “boundaries” and “spaces.” It is in the infinite spaces between ceramics and architecture, digital and analogue, interior and exterior, chaos and order, where he aims to carve his own niche as an artist. This struggle is deeply reflected in his works, which manifest at once an entirely new and singular kind of place that Nara has been building for himself.

We invite you to explore the unique artistic universe of Yuki Nara, and look forward to your visit.

Breaking away from the sphere of uniformness, my goal is to arrive at something that is rather complex and organic – something that contains the dynamic quality of “generation.”
Concretely speaking, it is a process that involves various struggles, a journey with twists and turns, on which I aim to ultimately grasp a certain picture through repeated cross-reference and cross-fertilization of specific techniques and matters, with other advanced fields.

Conventional, solemn works of ceramic art tend to just stand in our way.
In all their narcissistic unfathomableness, grandeur and utter exaggeration, they attempt to engage us in a conversation based on their merely material presence. This is a kind of interaction that does not generate lively conversation.
Ceramic ware is something light and lucid. There is no clear distinction between inside and outside, but only a vague boundary at which both are loosely connected and at once completely dissolved.
I believe that a slight change in material quality can trigger a change in our state of mind, and in the way we communicate.

– Statement by the artist 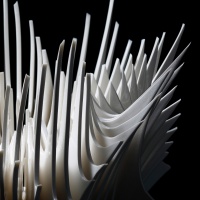